"Golf in Massachusetts plays a critical role in our nation's nearly $70 billion economy and $4 billion annual charitable impact. Large golf companies, such as Acushnet, are headquartered in the state and provide numerous jobs to local residents." Steve Mona, CEO of World Golf Foundation. 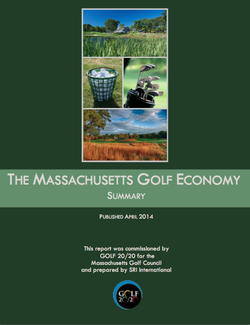 Published May 2014 - The  sport of golf may be played with a little ball, but a recently-released economic impact study entitled The Massachusetts Golf Economy — Full Report, shows that the Bay State golf industry indeed swings big for the state and local economies.


The report, which was developed for the Alliance of Massachusetts Golf Organizations (AMGO), showed that in 2012 the Massachusetts’ golf industry supported nearly 25,500 jobs with $796.8 million of wage income, generated roughly $74.3 million in charitable giving and continued to be the home of some notable golf equipment manufacturers that support the state's exports, such as The Acushnet Company (parent company of the Titleist brand of golf equipment and apparel) and Callaway Golf, among many others.

"This report indicates how important the golf industry is to our State and all of its citizens,” said Jesse Menachem, Executive Director of the Massachusetts Golf Association, which was one of nine organizations involved in this project. "In addition to generating jobs and providing a fundraising vehicle for charitable groups, the game also provides lifelong recreational and enjoyment for thousands of Bay State residents.”

To Menachem’s point, the MGA works directly with 376 golf courses located across the state and nearly 70% are open for public play. In addition, the participation rate in New England in 2012 was 1,258,000 according to a report produced by the National Golf Foundation. The total participation rate across the country was 25.3 million golfers.

“This new report shows that nearly everyone has been impacted by our industry,” said Leigh Bader, a PGA golf professional at Pine Oaks Golf Course in South Easton, owner of Joe & Leigh’s Discount Golf Pro Shop and a board member of Golf 20/20. “Both locally and nationally, golf is a major industry that generates jobs, commerce, economic development, high-quality open space and tax revenues for local communities. Not to mention, it also provides good quality family time and fun.”

How impactful is the golf industry on the Bay State economy?

The total impact of the golf industry on the state economy stems from both the employment and direct expenditures on goods and services by golf facilities and golf-related companies in the state. It also comes from the economic activity in tourism, real estate, and other industries supported by the game of golf. When these linkages and impacts on other sectors of the economy are included, the $1.7 billion Massachusetts golf industry supports:

A further important impact of Massachusetts’ golf industry at the local, regional and state level is its charitable impact. At the championship level, the Deutsche Bank Championship has raised more than $24 million for the Tiger Woods Foundation and local New England-area charities since its inception in 2003.

Golf is a key fundraising catalyst for non-profit organizations, such as Jimmy Fund Golf, Golf Fights Cancer and the Francis Ouimet Scholarship Fund, that continuously raise significant funds for local charities. At the local level, the state's 376 golf facilities host multiple charitable events each year. In 2012, the total amount of charitable giving attributed to the game of golf was roughly $74.3 million.

Those figures are sure to increase as earlier this year it was announced that the United States Golf Association (USGA) and the PGA Tour would be bringing major championship events to Massachusetts beginning in 2015. Belmont Country Club will serve as host site of the 2015 Constellation Senior Players Championship, while Wellesley Country Club will open its doors to the 2016 U.S. Women’s Amateur Championship.

“Despite the recession of 2007-2009, our industry has come together to create jobs and PGA Professionals are working hard to grow the game," said Mike Higgins, executive director of the NEPGA which is the seventh largest of the nation's 41 Professional Golf Association Sections. "This report shows that we are moving the needle and making an impact."

Published in May 2014 by SRI International, The Massachusetts Golf Economy — Full Report was accomplished through a comprehensive, standardized framework that can be replicated nationwide.

About the Massachusetts Golf Economy – The Full Report

Special thanks to Golf 20/20 for its pioneering role in developing state economic impact studies for the golf industry. Golf 20/20 is a collaborative effort of many forces within the golf industry, from the associations and manufacturers to the course owners/operators and the media, focused on the game and its future.